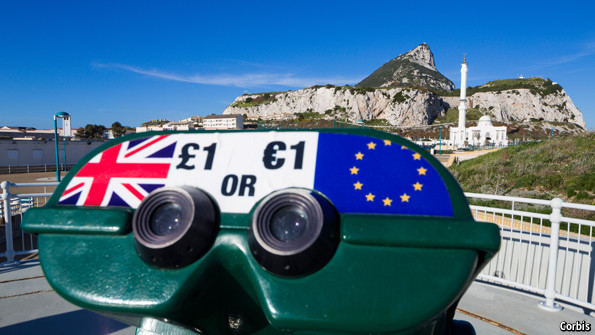 Why is Gibraltar a British territory?

SPAIN is protesting to Britain again about a certain rocky outcrop at the neck of the Mediterranean. Gibraltar, a 2.6 square mile (6.7 square kilometre) peninsular that is home to about 30,000 people, is a British territory to which Spain has long laid claim. This week the old argument resurfaced as Spanish officials toughened border inspections, slowing traffic to a crawl, and Spain’s foreign minister threatened a €50 ($67) charge on crossings, to the alarm of locals on both sides of the border. The measures were apparently in response to the Gibraltar government’s decision to sink spiked concrete blocks into the sea to fend off Spanish fishermen, whom it accuses of poaching Gibraltarian fish. Perhaps more relevant, the Spanish government is desperate to change the subject from an ongoing party-funding scandal, which has threatened to engulf Mariano Rajoy, the prime minister. A phone call between Mr Rajoy and David Cameron, the prime ministers of of Britain, on August 7th apparently defused tensions somewhat. But why is Gibraltar, which lies 1,000 miles south of London, a British territory in the first place?

The days when the sun never set on the British empire are long gone. But Britain retains 14 “Overseas Territories”, spread around the world from the Pacific to the South Atlantic. With the exception of the British Antarctic Territory, a wedge of wilderness populated by a few scientists and many penguins, they are tiny specs. The Pitcairn Islands, which lie roughly half way between New Zealand and Peru, are home to about 50 people; Bermuda, the most populous of the Territories, has only about 65,000 residents. Many, including Gibraltar, have been home to Royal Navy bases. These days they are more likely to earn their keep through tourism and offshore finance.

Gibraltar was ceded to Britain following the War of the Spanish Succession of 1701-14. Charles II of Spain, who was known as “The Bewitched” because of his severe physical and mental disabilities, died in 1700 without an heir. It was unclear who should succeed him, and so Europe’s great powers began to push their own preferred candidates. War soon broke out, and in August 1704 British soldiers, fighting alongside Dutch allies, captured the Rock, as Gibraltar is known. The war continued until 1713, when the Treaty of Utrecht determined that Philip V, a grandson of the king of France, would inherit the Spanish throne. As part of the deal some Spanish territories were dished out to other countries. Britain got Gibraltar, as well as Minorca, which changed hands several times before being returned to Spain as part of the Treaty of Amiens in 1802.

Gibraltar has remained under British control ever since, in spite of various attempts to take it back, including an unsuccessful siege by Spain that lasted for nearly four years until 1783. Under the dictatorship of General Francisco Franco, Spain shut its border with Gibraltar entirely; it was reopened fully only ahead of Spain’s accession to the European Union in 1985. Fishing boats aside, no further invasions are likely. But Spain continues to claim Gibraltar as its own. Those who live on the Rock disagree: referendums in 1967 and 2002 were almost unanimous in their support for maintaining British sovereignty. Britain looks likely to keep its scrap of Mediterranean coastline for now. It may be just as well for Spain: if Britain were to hand over Gibraltar, the Catalans, who lost their autonomy to Spain in the aftermath of the Treaty of Utrecht, might consider it an interesting precedent.