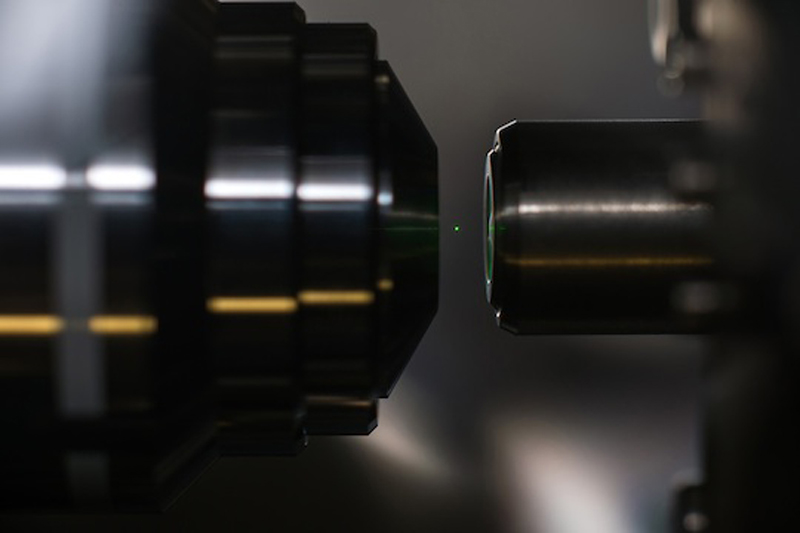 In quite an eerie feat, physicists have floated microscopic diamonds in midair using laser beams.

Researchers have already used lasers to levitate extremely small particles, such as individual atoms, but this is the first time that the technique has worked on a nanodiamond, which, in this case, measures just 100 nanometers (3.9 x 10-8 inches) across, or more than 1,000 times thinner than a fingernail.

In the new study, the physicists from the University of Rochester relied on the fact that a laser beam, which is made up of photons, creates a tiny force that usually can’t be felt. [Wacky Physics: The Coolest Little Particles in Nature]

“If we turn on a light or open a door and feel the sun, we don’t feel this push or pull,” study researcher Nick Vamivakas said in a video released by the university. “But it turns out that if you focus a laser down with a lens to a very small region of space, it can actually pull on microscopic, nanoscopic particles.”

To force the tiny diamonds to float, Vamivakas and his colleagues focused a pair of lasers toward a clear vacuum chamber and then sprayed the diamonds into the chamber using an aerosol dispenser. The diamonds gravitated toward the light, and some eventually levitated in a stable position.

Sometimes, the levitation occurred within just a couple of minutes, while other times, the process took a bit longer.

“Other times, I can be here for half an hour before any diamond gets caught,” Levi Neukirch, a graduate student at the University of Rochester who was involved in the study, said in a statement. “Once a diamond wanders into the trap, we can hold it for hours.”

The team hopes the findings will have applications in quantum computing and, more theoretically, help explain how friction operates on extremely small scales.

“The position of the crystal in the trap is a very sensitive probe of forces in its environment,” Vamivakas said in the university video. “The reason this is important is, as technology continues to shrink down to these length scales, we need to understand how the environment will interact with the devices that we are making.”

The team plans to continue its experiments in order to better understand the physical behavior of the crystals, which could help address other basic unanswered questions in physics.

The levitation experiment is detailed this week in the journal Optics Letters.