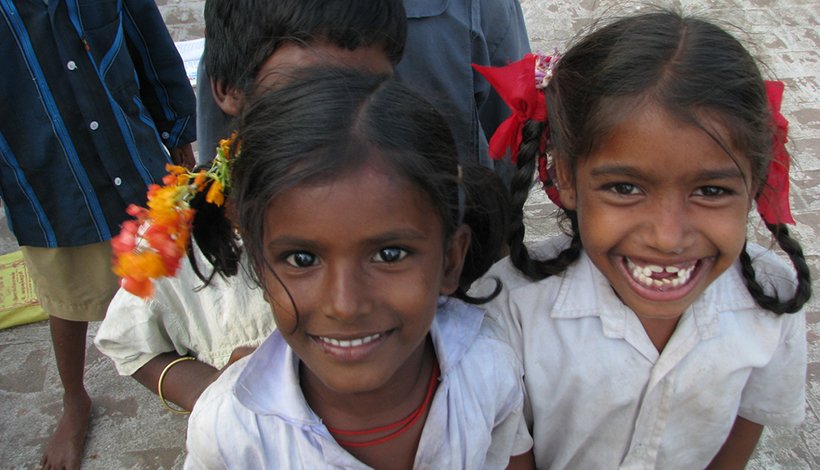 India Is One Of The Worst Places To Be Born, But This Group Is Trying To Change That

NEW DELHI (WOMENSENEWS)–Three young women here hold court in the middle of the room, bedecked in their finest jewelry: necklaces, earrings, bangles. They haven’t been this dressed up since their weddings. Lavish gold and red saris drape over them, nearly concealing their swollen bellies.

They are surrounded by their mothers and sisters, aunts and cousins and friends, who are seated on the floor or standing up against the wall of the community center. A few attendees beat drums, and all of them sing joyously.

The mothers-to-be, all in their third trimesters, are participating in godh bharai, the Hindi word for a ceremony that any American mother would recognize: a baby shower. Like baby showers in the United States, the women play various games–guess the gender! suggest names!–and men are usually forbidden.

Godh bharai has a long history in India. The Hindi phrase translates to “fill the lap”; traditionally, family members at these events deposit gifts of food, money, clothes and jewelry in the laps of expectant mothers. And it’s not just a tradition in North India. They call it shad in Bengal, seemandham in Kerala and valakappu in Tamil Nadu. Among ceremonial variations there’s one common element: celebration of a forthcoming child.

The government has relocated families from overcrowded urban slums within Delhi to Holumbi Khurd and Holumbi Kalan, on the outskirts of this large city. Here, a nongovernmental group, Child Survival India, has begun working with community leaders and health workers to introduce new elements to the festivities.

Now, older women in equally festive colors step forward to present the mothers-to-be with platters bearing peanuts, leafy greens and fruit; foods rich in iron and vitamin C. They explain how the young women–all of whom look to be in their teens–should eat to remain healthy during their pregnancies and how to continue nourishing themselves and their children after the births.

“Baby showers have been going on for ages, everywhere in India,” Doshi says. “But this form of baby shower; that is something from Child Survival India.”

“India is home to 42 percent of the world’s underweight children and ranked a dismal 65 out of 79 countries covered in the Global Hunger Index 2012,” Kunal Kumar Kundu reported for The Wall Street Journal late last year. A lack of food at an early age has long-lasting effects on a child’s health and development.

A key factor in a child’s health is his mother’s health. “More than half of all married women are anemic and one-third of them are malnourished,” UNICEF reports. Pregnancy, birth and breastfeeding place high demands on a malnourished woman’s already poor health, and only 41 percent of new Indian mothers introduce early breastfeeding.

It is key, therefore, to reach out to women as early as possible in order to improve their health and the well-being of their families.

Doshi says that the mothers in Holumbi Khurd and Holumbi Kalan have embraced the altered baby shower traditions. “For them, it’s the celebration,” he says. “They all come, dressed up. They wear whatever jewelry that they have. They’re all decked out for this. Not only the pregnant ladies, but even the community.”

Nutritional support of soon-to-be-mothers doesn’t start here. “The moment it is known in the community that the lady is pregnant, the nongovernmental organization tracks them,” Doshi says. Child Survival India provides expectant mothers with information about neonatal nutrition and other health services.

But at the baby showers, Doshi says, “it’s more of a learning for fun.”

The celebration of nutrition reaches beyond expectant and new mothers to the many impressionable young girls who also attend the showers. It also reaches women who have relocated to the area with their families. They may already have children, but for some this is their first introduction to a nutrition-focused godh bharai.

The best part? It barely costs a thing. The community health workers use grains, vegetables and fruits from their own kitchens, but the gifts are more symbolic than substantial.

By using existing customs to drive home their messages gently, Child Survival India opens up the lines of communications for other health campaigns, such as encouraging mothers to have their babies delivered at hospitals.

In order to enact real change in child health, however, the status of women must first change. Studies have shown that the poor health of women and their children is directly linked to the low socioeconomic status of those women.

Innovative reinventions of traditions like this can only help elevate more women. For now, the three young women at the center of this are obviously benefiting. Dazzlingly dressed and seated at the center of a boisterous party, they smile widely.