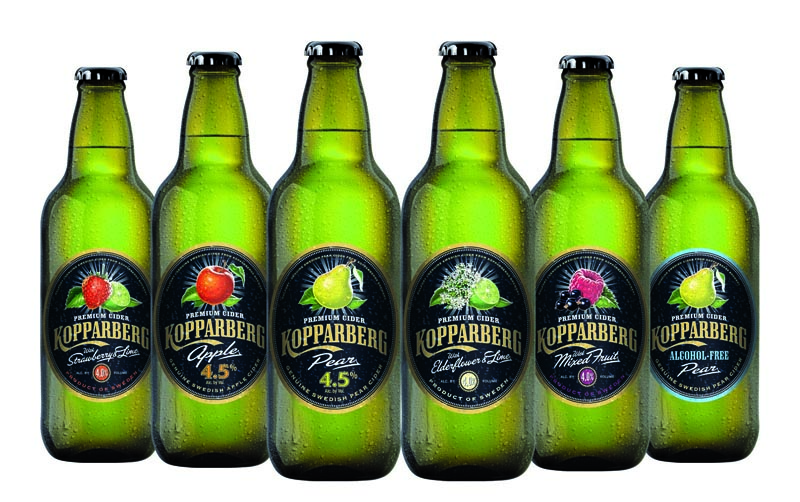 A near-death experience after falling overboard from a container ship in the South China Sea 26 years ago made Peter Bronsman, now a multimillionaire cider-maker, vow to make more of his life.

The Swede, then a 24-year-old merchant seaman, had plunged into the water in the middle of the night and broken an arm. He clung to a plastic rubbish sack for buoyancy in the rough waves.

“It all happened so fast. I was told to throw some refuse sacks overboard, but somehow lost my footing and went with them,” says Mr Bronsman.

“Suddenly I’m in the sea and the ship has just disappeared. It was pitch-black, and it is not so easy to swim with just one arm.

“I just clung to one of the sacks with my good arm and screamed. But it was just me and miles of ocean. I was absolutely sure a shark would come and get me. My feelings were that I mustn’t die, and I if survived I was going to set up my own business.”

Thankfully for Mr Bronsman, one of his shipmates had seen him fall, and sounded the alarm. Two hours later he was rescued.

Mr Bronsman immediately quit life at sea, and returned to the Swedish second city of Gothenburg in 1987 determined to establish his own company.

A keen beer drinker, he and his brother Dan-Anders started to import brands from around the world – the brews Mr Bronsman had enjoyed on his global travels in the Swedish merchant navy.

The business soon proved successful and grew, even though Sweden’s strict licensing laws meant he could sell to only one customer – Systembolaget, Sweden’s state-run alcohol monopoly.

To this day Systembolaget runs all Sweden’s off-licences, and until 1996 it was also the sole alcohol supplier for bars and restaurants.

“Dealing with the government was fine. We didn’t know any different, and it was good to listen to them [and their advice] ” says Mr Bronsman. “But what I said to my brother [who also helped run the business] was that to make better money we had to own our own brewery.”

So from savings built up from the import business, and a bank loan, the Bronsmans bought a former brewery in the the central Swedish town of Kopparberg for $620,000 in 1994.

At the time the facility was only being used to bottle water, but with Peter in the lead role as managing director, he and his brother started brewing a lager and then a range of ciders, including pear and mixed fruit-flavoured versions, under the Kopparberg name.

While the lager is now a bestseller in Sweden, it is the ciders that have enjoyed an export boom.

Mr Bronsman did this all thanks to coming up with a novel way of getting round Sweden’s ban on alcohol advertising and promotions.

“We couldn’t do anything to promote Kopparberg in Sweden, so I thought, ‘Why not go for Swedes when they are on their summer holidays in the Mediterranean?’ ”

And so Mr Bronsman flew to the Spanish Balearic Islands and to Greece to cut deals with Spanish and Greek drinks importers. As a result, his cider was suddenly on sale from Ibiza to Crete, with free samples widely given out.

“It was great. More and more Swedish people tried the ciders while they were on holiday, and they really liked them, and so they continued to buy them when they went home. So domestic sales shot up,” he says.

“At the same time, other nationalities on holiday in the Mediterranean also tried the cider and loved it, particularly the British, so it had a very beneficial side-effect.”

While Kopparberg’s ciders may be far too sweet for traditionalists, they are now among the bestselling in the UK.

And Mr Bronsman says it was a deliberate plan to make them sweeter than most rivals as he saw this as a major gap in the cider market.

Today, Kopparberg Breweries is Sweden’s largest brewery, making 75 million litres of cider last year, compared with half a million litres in its first year of cider production. Its turnover in 2012 was $350m (£225m).

It currently exports to 50 countries, and that is set to expand after it recently signed a distribution deal with global brewing giant SAB Miller.

For the 50-year-old Mr Bronsman, the 2013 Ernst & Young Swedish Entrepreneur of the Year, he remains as enthusiastic as ever about running the company.

“It was just my brother and I when we started out in business, and we worked very long hours and times were often tough, but were very happy,” he says.

“The long hours and the levels of happiness haven’t changed. I’ve had a fantastic life.”

Mr Bronsman adds: “For the last 25 years I have always taken it day by day and, sure, I have made mistakes in business. But what boss hasn’t? If you don’t take risks, which occasionally will fail, then you aren’t doing your job properly.

“And I hope I still have the same drive that I always have had because there is still so much to do at Kopparberg.”