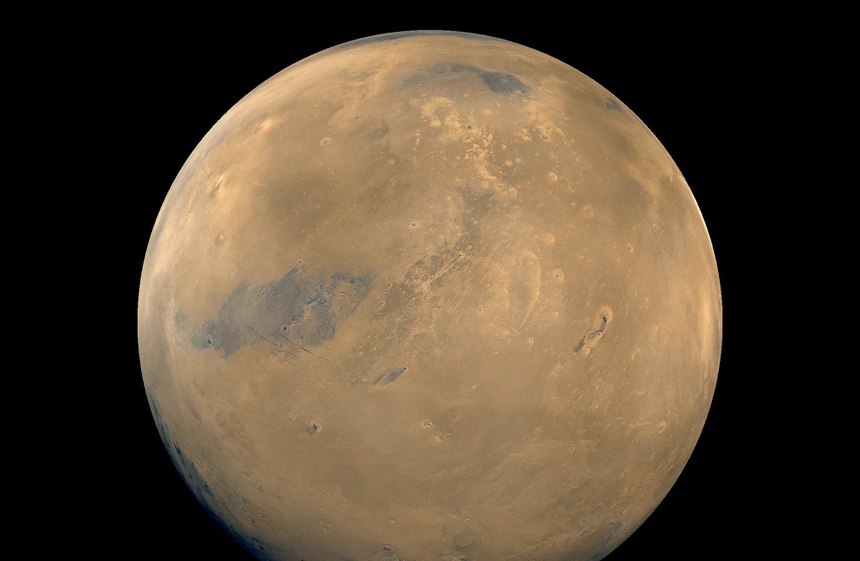 Earth life ‘may have come from Mars’

Life may have started on Mars before arriving on Earth, a major scientific conference has heard.

New research supports an idea that the Red Planet was a better place to kick-start biology billions of years ago than the early Earth was.

The evidence is based on how the first molecules necessary for life were assembled.

Details of the theory were outlined by Prof Steven Benner at the Goldschmidt Meeting in Florence, Italy.

Scientists have long wondered how atoms first came together to make up the three crucial molecular components of living organisms: RNA, DNA and proteins.

The molecules that combined to form genetic material are far more complex than the primordial “pre-biotic” soup of organic (carbon-based) chemicals thought to have existed on the Earth more than three billion years ago, and RNA (ribonucleic acid) is thought to have been the first of them to appear.

Simply adding energy such as heat or light to the more basic organic molecules in the “soup” does not generate RNA. Instead, it generates tar.

RNA needs to be coaxed into shape by “templating” atoms at the crystalline surfaces of minerals.

The minerals most effective at templating RNA would have dissolved in the oceans of the early Earth, but would have been more abundant on Mars, according to Prof Benner.

This could suggest that life started on the Red Planet before being transported to Earth on meteorites, argues Prof Benner, of the Westheimer Institute of Science and Technology in Gainesville, US.

The idea that life originated on Mars and was then transported to our planet has been mooted before. But Prof Benner’s ideas add another twist to the theory of a Martian origin for the terrestrial biosphere.

The researcher points out that boron minerals help carbohydrate rings to form from pre-biotic chemicals, and then molybdenum takes that intermediate molecule and rearranges it to form ribose, and hence RNA.

This raises problems for how life began on Earth, since the early Earth is thought to have been unsuitable for the formation of the necessary boron and molybdenum minerals.

Prof Benner explained: “It’s only when molybdenum becomes highly oxidised that it is able to influence how early life formed.

“This form of molybdenum couldn’t have been available on Earth at the time life first began, because three billion years ago, the surface of the Earth had very little oxygen, but Mars did.

“It’s yet another piece of evidence which makes it more likely life came to Earth on a Martian meteorite, rather than starting on this planet.”

Early Mars is also thought to have had a drier environment, and this is also crucial to its favourable location for life’s origins.

“What’s quite clear is that boron, as an element, is quite scarce in Earth’s crust,” Prof Benner told BBC News, “but Mars has been drier than Earth and more oxidising, so if Earth is not suitable for the chemistry, Mars might be.

“The evidence seems to be building that we are actually all Martians; that life started on Mars and came to Earth on a rock,” he commented.

“It’s lucky that we ended up here, nevertheless – as certainly Earth has been the better of the two planets for sustaining life. If our hypothetical Martian ancestors had remained on Mars, there may not have been a story to tell.”