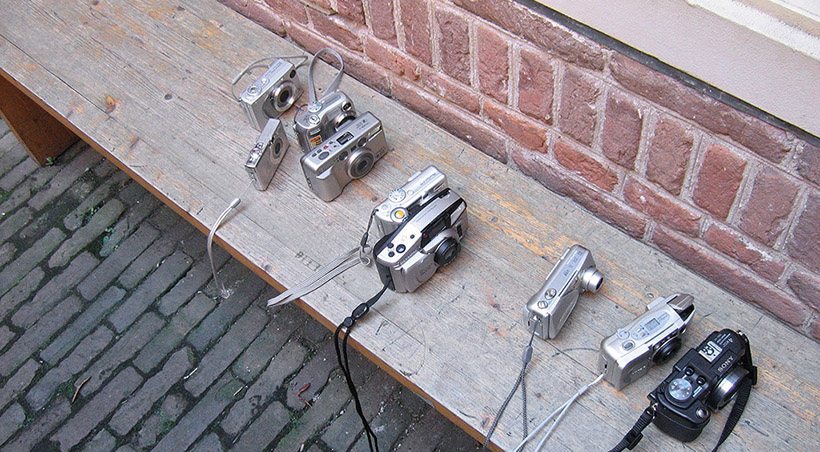 Digital Cameras Are Messing With Your Memory

Socrates once feared that technology would corrupt human memory. Quaint as it sounds today, he was worried about a form of communication called writing. The more easily people could access something in a document, he reasoned, the less inclined they’d be to remember it.

The great philosopher’s point rings as true in the digital age as it did in ancient Greece. Recent tests have found that people who think a computer will save their information recall much less of it than those led to believe the machine will delete it. A difficult trivia question is as likely to bring Google to mind as it is the answer.

Fairfield University psychologist Linda Henkel believes something similar may be happening with digital photography. The more easily people can take and access pictures, she says, the less inclined they may be to remember the moment itself. “You’re just kind of mentally discounting it–thinking, ‘Well, the camera’s got it,'” Henkel tells Co.Design.

Henkel draws that conclusion from a study she recently conducted at the Bellarmine Museum of Art on Fairfield’s campus. In one of her experiments, she gave test participants a digital camera and an itinerary of museum objects to view. Some of the objects were simply observed. Some were photographed whole with the digital camera. Some were photographed with explicit instructions to zoom in on a detail.

The following day, Henkel gathered the participants and tested their memories about the museum experience. She showed them the names (or pictures) of all the objects they’d seen, as well as 10 they hadn’t, and asked them whether or not they’d gone up to the item, and if so whether they’d simply observed it or photographed it. For each item they said they saw, she also questioned them about a detail.

Socrates would have enjoyed the results. Test participants recognized fewer objects they’d photographed whole than those they’d observed on their museum tour (from both the list of names and the roster of pictures). They were also much less accurate in recalling visual details of museum objects they’d photographed whole, compared with those they’d only observed. Simply put, they took the picture and missed the moment.

In a paper set for publication in Psychological Science, Henkel calls her finding the “photo-taking-impairment effect.” When people know a camera will document an object or event, they may well dismiss it from their own mind. Digital cameras seem particularly conducive to the effect since it’s far easier (and cheaper) to take and store digital pictures than it is to develop film or compile photo albums.

In other words, the facility of digital photography may well come at the cost of cognitive engagement. “I think it’s about the mindlessness with which people approach the task,” says Henkel. “If you treat acquiring the photograph as if it’s just something to get off your checklist–been there, done that, check–that’s what’s going to create this dismiss-this-from-memory thing.”

The experiment also revealed an important limitation of the photo-taking-impairment effect. When test participants zoomed in on an object, they remembered it as vividly as those objects they had observed (and, of course, far better than the ones they’d photographed whole). What’s more, participants even remembered details about the object that they hadn’tzoomed in on.

Henkel suspects that zooming triggered a completely different cognitive process. While the rote act of photographing a whole object led a person to dismiss it from memory, the slight uptick in focus required to zoom in on a detail caused the same person to absorb the scene as if there were no camera present at all. The brief mental climb from click to zoom-click was enough to overcome the impairment effect.

Whether or not the same problem occurs with a smartphone camera is an open question. Henkel believes it probably does, since phones use digital photography, too. Then again, research suggests that touch screens cause people to feel a heightened sense of ownership toward whatever they’re viewing. This tactile effect could perhaps counteract the impairment effect, much in the way zooming in does.

Of course, an impaired memory for photographs doesn’t have to be a bad thing at all. Looking at photographs later on does help recover memories of the moments in question, just as a quick web search helps recover information. In that sense, the transfer system is working as expected. Socrates might have frowned on shifting knowledge into documents, but no less a mind than Einstein once advised people not to memorize what they could easily look up in books.

The larger problem, says Henkel, occurs when people amass so many digital photographs that organizing them becomes a prohibitive task. So not only is their memory for the moment impaired, but they’ve lost the ability to recover it, too. “I think if people were more mindfully photographing things, if maybe they were making fewer photos with more choice and interaction with these things, that’s where you’d not see the photos impairing you,” she says. “And obviously looking at the photos afterward. Reminiscing about them–using them as a retrieval.”